INPEX is one of the world’s great energy production corporations producing and delivering clean, efficient and reliable natural gas for the Asia-Oceanic region.

We’re a young company, with the modern INPEX Corporation founded in 2008, following the merger of INPEX, Teikoku Oil and INPEX Holdings. Now the largest energy exploration and production company in Japan, we’re aiming to become a global top 10 producer in the next 20 years.

Our most significant world-class operation is Ichthys LNG in northern Australia. A modern engineering accomplishment, Ichthys LNG is one of the most technically challenging resources operations on the planet.

The Australian development success followed a series of joint venture projects in exploration and production.

Significantly, Ichthys is the first venture for INPEX as Operator.

It has coincided with major development milestones in other regions - including first oil from the large scale Kashagan Oil field in Kazakhstan and expanded acquisitions in Abu Dhabi.

The INPEX vision for the future is based on a strong focus on corporate social responsibility that contributes to the creation of a brighter future for society through our efforts to develop, produce and deliver energy in a sustainable way.

Beyond our core business of oil and gas, we will deliver alternative energy solutions including renewable energy.

The Ichthys Field was discovered in 2000 and we celebrated the first gas cargoes in 2018, marking the start of a new era of economic and social benefits for Australia and Japan. 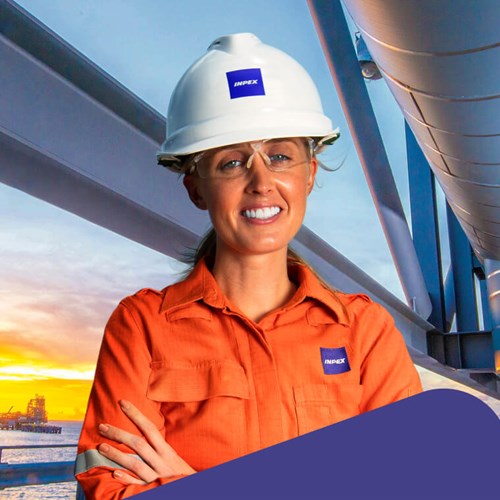 Delivering benefits to Australia for the next 40 years...