The Larrakia Development Corporation (LDC) has had a team of people working at the INPEX-operated Ichthys LNG onshore facilities in Darwin, Northern Territory with contractor TRACE JV (TRACE) since October 2019.

During this time the LDC team has enjoyed considerable success and has grown to 20 members from nine initially.

LDC has assisted INPEX and TRACE with a wide range of work scopes including coating and insulation activities, general operations support, warehousing and ship mooring. Through working on site, LDC team members have learnt about general safety expectations in and around a gas facility and specifically, the key areas of gas process safety.

The quality of the LDC team members and the experience they have gained at Ichthys LNG has enabled them to transfer to roles in the main warehouse on site and into the Programmed Traineeship program.

In addition, in March as part of a site-based International Women’s Day event, LDC team member Kasani Kalikazaros received a special mention in the “Making a Difference” category.

“The relationship between INPEX, TRACE and LDC is proving to be a good source of locally based resources,” said Stuart.

“We’re really proud of the history we share with the LDC team. We’re looking forward to continuing the good work that has been done and we’re committed to creating pathways that progress careers for local people,” said Nicky.

The collaboration between LDC and TRACE has strengthened with possible expansion into other local projects being considered. Their partnership is one of only a few that carry dual badging on their shirts! 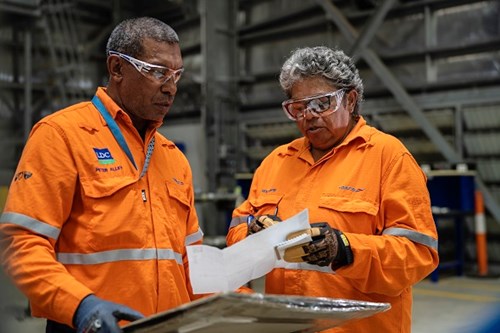